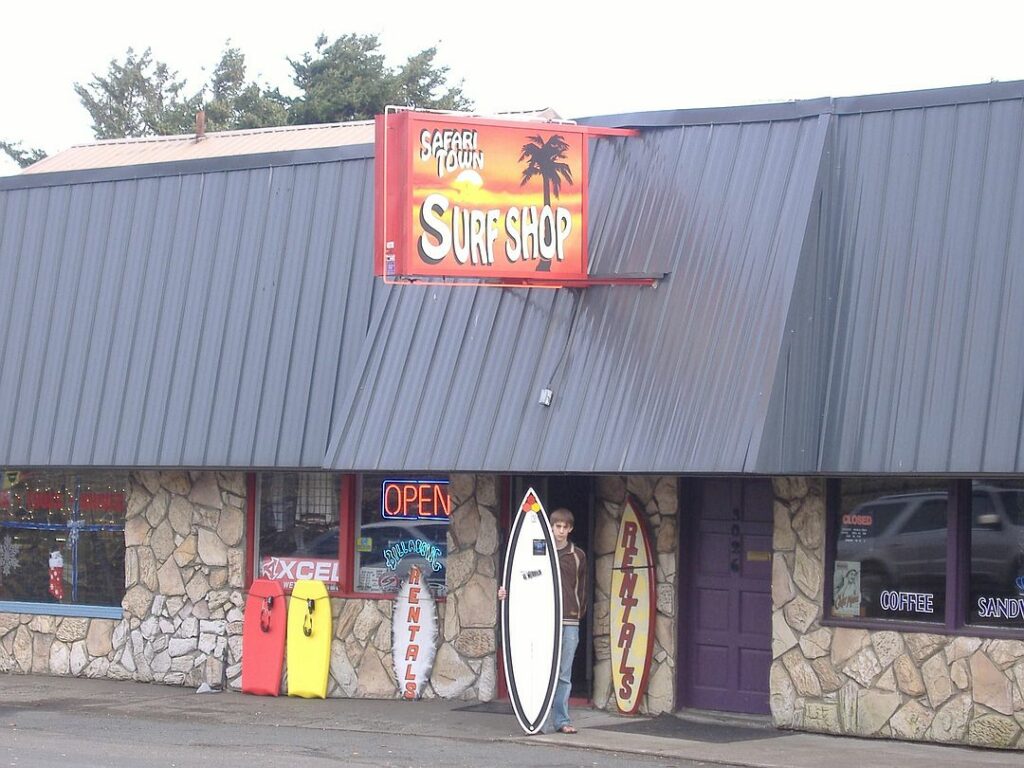 Looking back to 1989 when they first opened, there were only a handful of surfers in Lincoln City.  The advice they received from many was that they would never make it. “Have you done a market analysis on surf shops in the area?” No…not yet Tony replied.

Safari Town surf shop began in a bedroom.  Tony Gile while at work one day, had an idea. He got enough guys together to order some wetsuits and started an account with a wetsuit company. One thing led to another and it wasn’t long before people were asking if he could get wax, leashes, and other items. Tony discovered there was an honest demand for a surf shop that catered to real surfers.

Soon his bedroom was getting full. With no money to open a surf shop,  Tony continued to sell surf gear from home and out of the back of his Toyota pickup. They all worked hard and did everything they could to make the dream a reality.  Tony doubted at times they’d ever really have a surf shop, but he still  kept trying. They screened printed their own t-shirts, shaped and glassed surfboards, worked long hours, and surfed as much as they could. The stoke and the vision was real! Things went on like this for a while, and eventually they decided to give it a go and rented a small space in Lincoln City and Safari Town Surf Shop was born!

When they first opened Tony’s wife Jeanne wanted Tony to keep his day job at Garage Door Sales and just open the surf shop on the weekends. That seemed to Tony like giving up before they even began. Tony wanted to try his best even if it that meant failing. He promised Jeanne if they couldn’t make enough money to make things work, he’d get a night job to help pay the bills. Jeanne agreed, Tony put in his notice to quit his job, and their journey began. They started the shop with no money and no credit, so getting a loan was not really an option. They instead built their inventory little by little and worked hard to gain a loyal clientele with good customer service.

30 years later Safari Town is still a small shop with big dreams! There have been some tough years, and they’ve discovered it can be really difficult running a seasonal business on the Oregon coast. They wouldn’t trade it though. They’ve made so many friends through the years, and It’s been so rewarding to be able to make a living, while at the same time do something they love and enjoy.

Safari Town is thankful to everyone who has supported their business through the years and would like to take this opportunity to say thank you to the wonderful community for supporting their family run surf shop, and helping a stoked young surfer discover that with hard work and determination dreams really can come true!

Much has happened since 1989. Tony and Jeanne have been blessed with 3 kids and Safari Town Surf Shop has become a true family business. Jeanne and Tony run the shop with the help of Kevin, Kendal, and their employee Chase. Their kids have all worked at the shop at one time or another. Kevin and Kendal still work at the shop in the busy summer months and also work as kayak tour guides, and  surfing instructors.

While learning the art of designing custom surfboards and expanding from one t-shirt rack and no telephone to the danger of overflowing, Tony was shocked at the shops instant popularity. Being a surfer himself, Tony understood the importance of staying focused on surfing. Safari Town Surf Shop welcomes everyone, and while keeping in it’s tradition, catches the eye of tourists and surfers alike. They have also expanded and added guided kayak tours and fat bike rentals and tours to the list of services they offer.

Safari Town thanks Lincoln City and everyone who has supported their business for 30 great years! They are looking forward to many more. 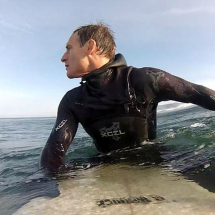 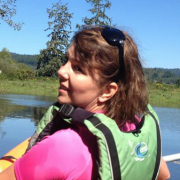 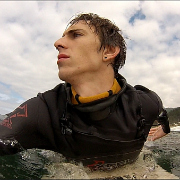 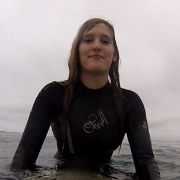 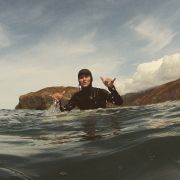 This is Safari Town Surf 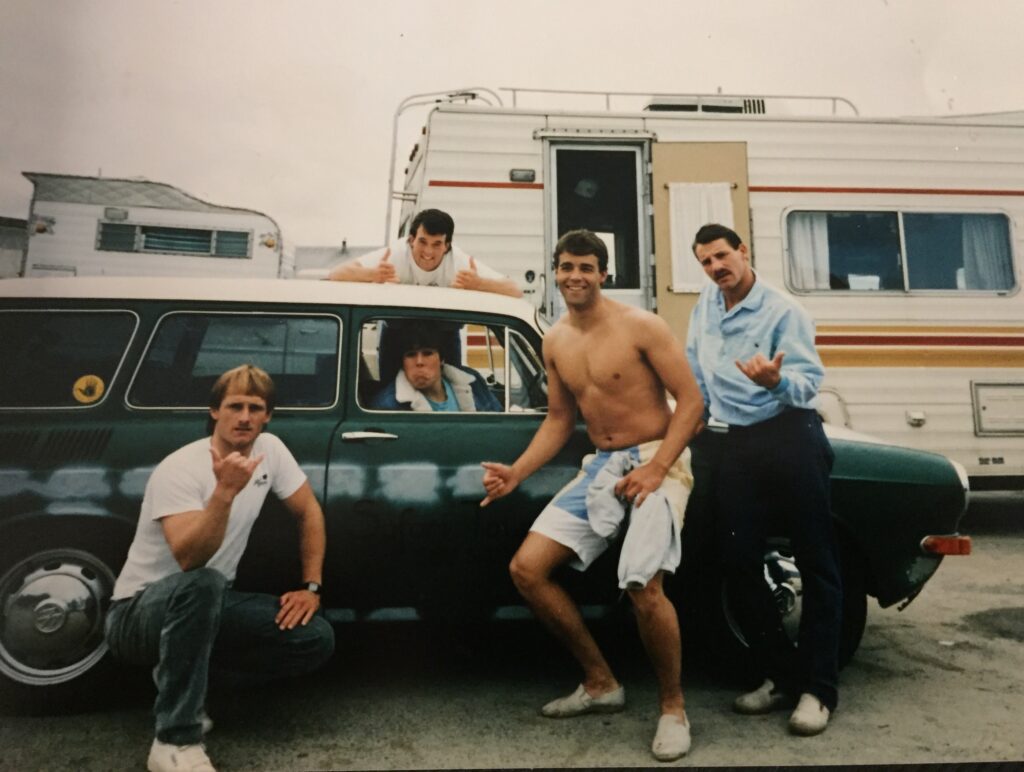 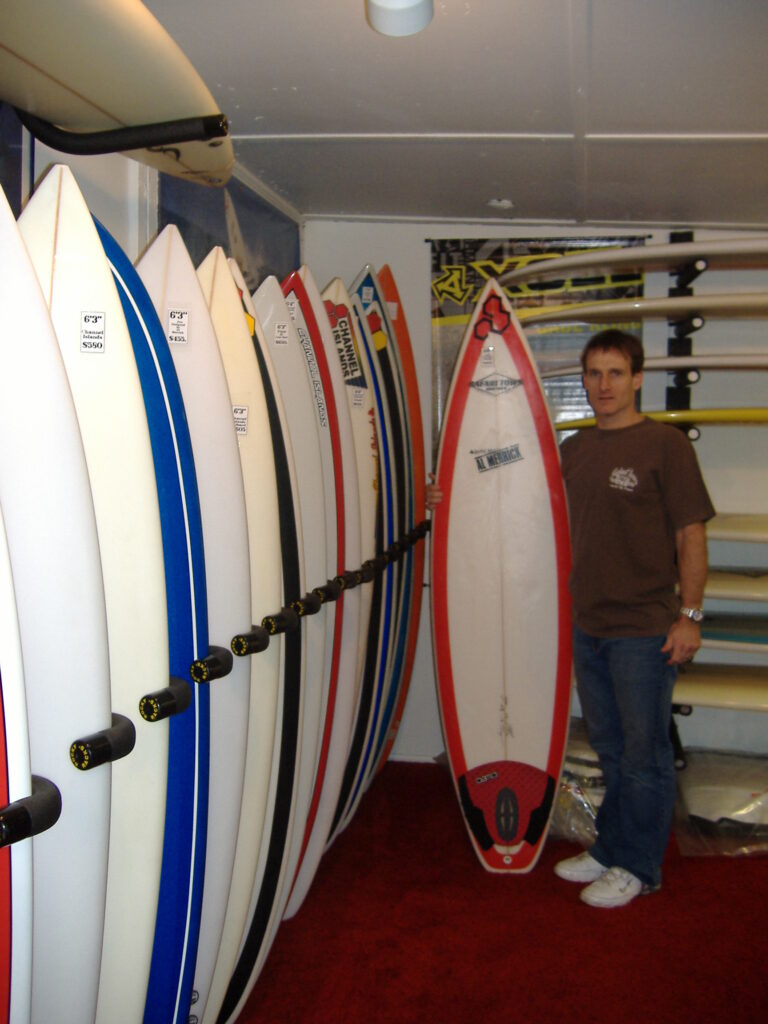 Tony Gile in the boardroom 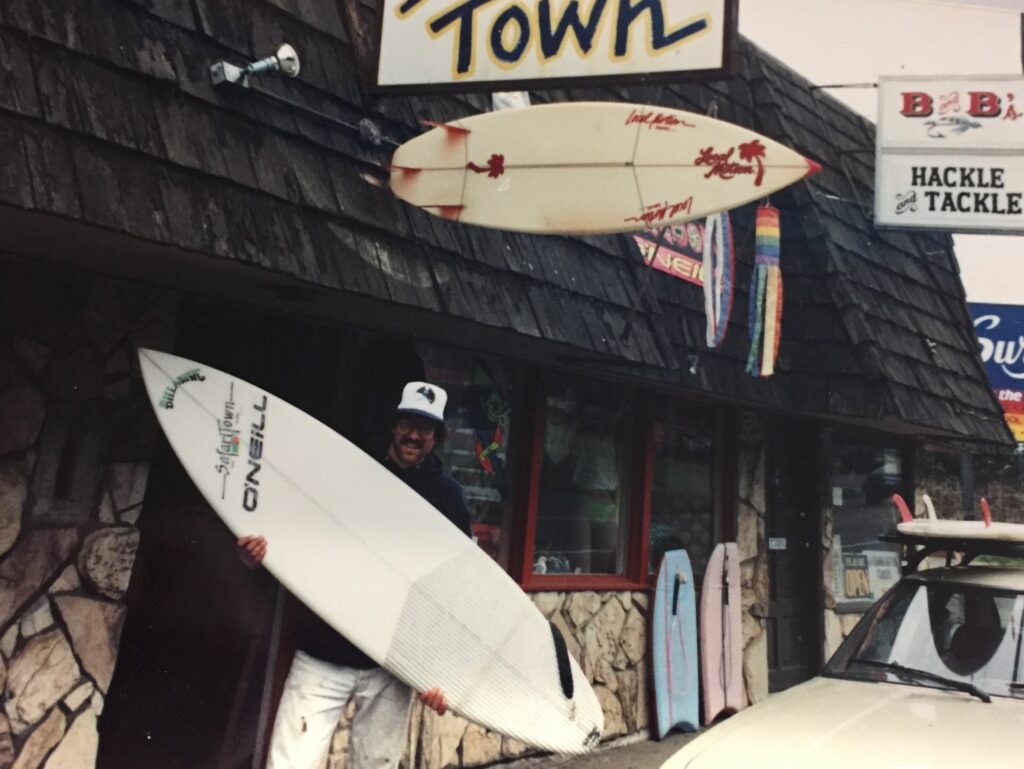 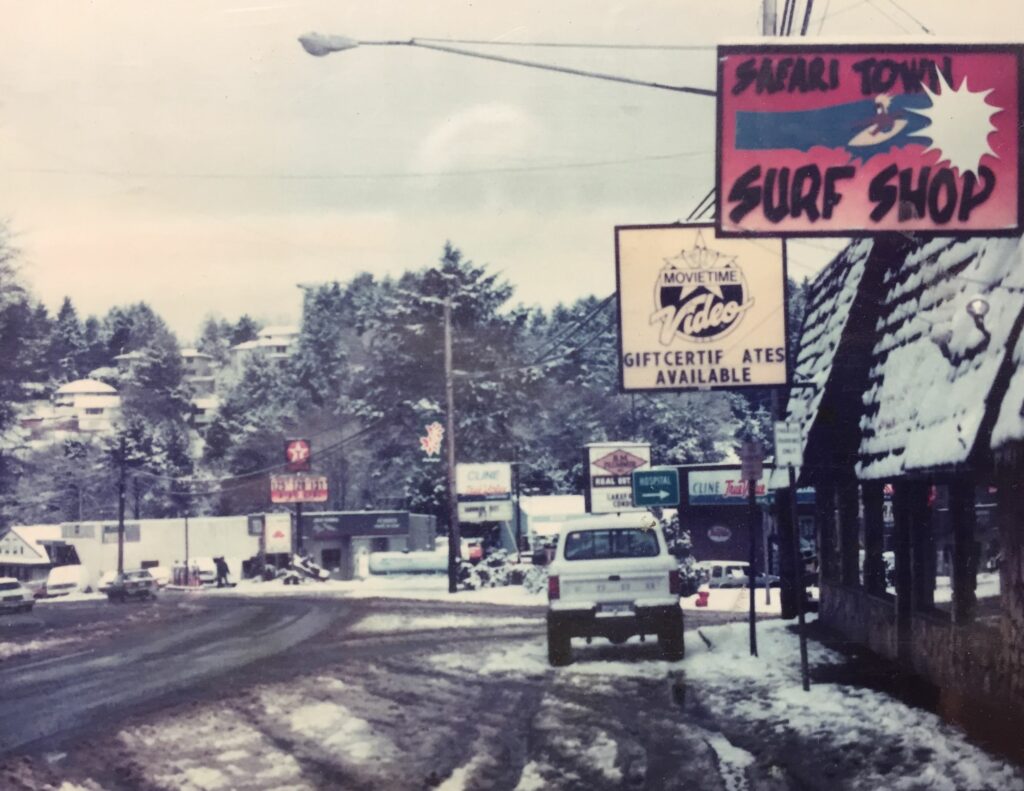 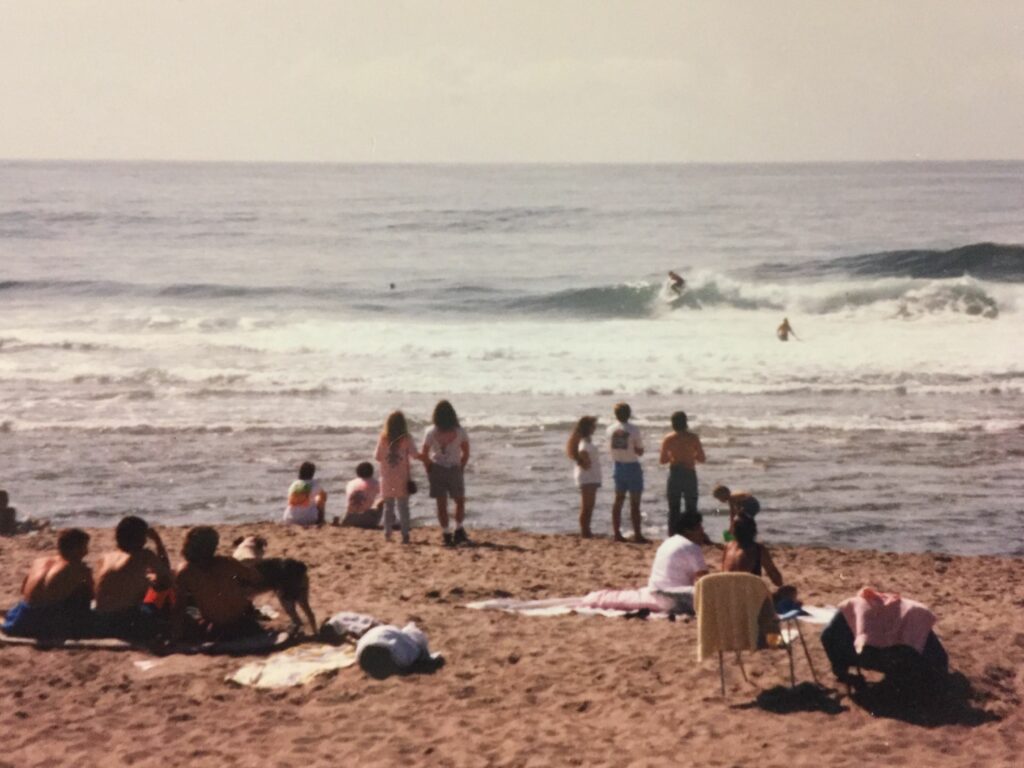 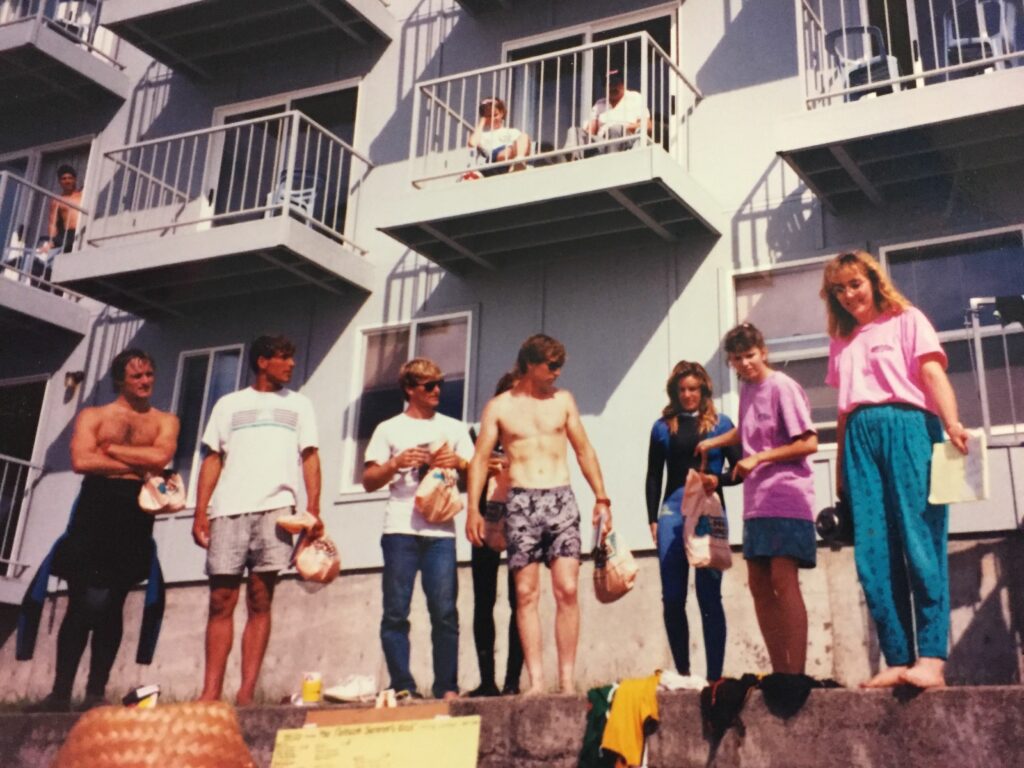 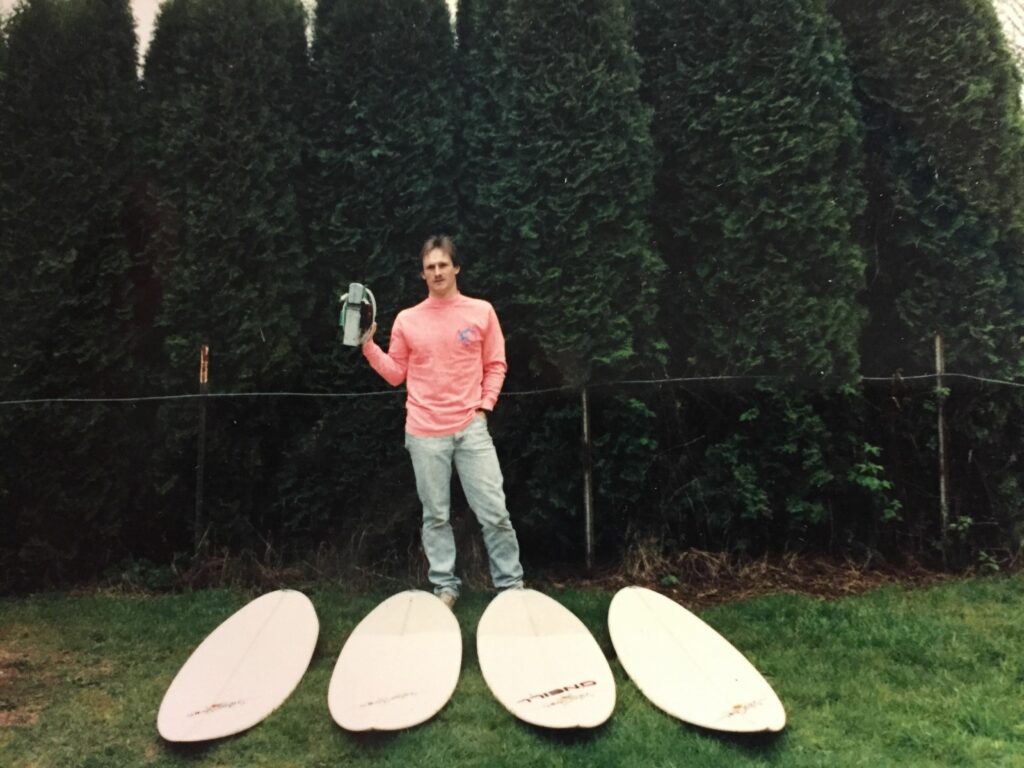 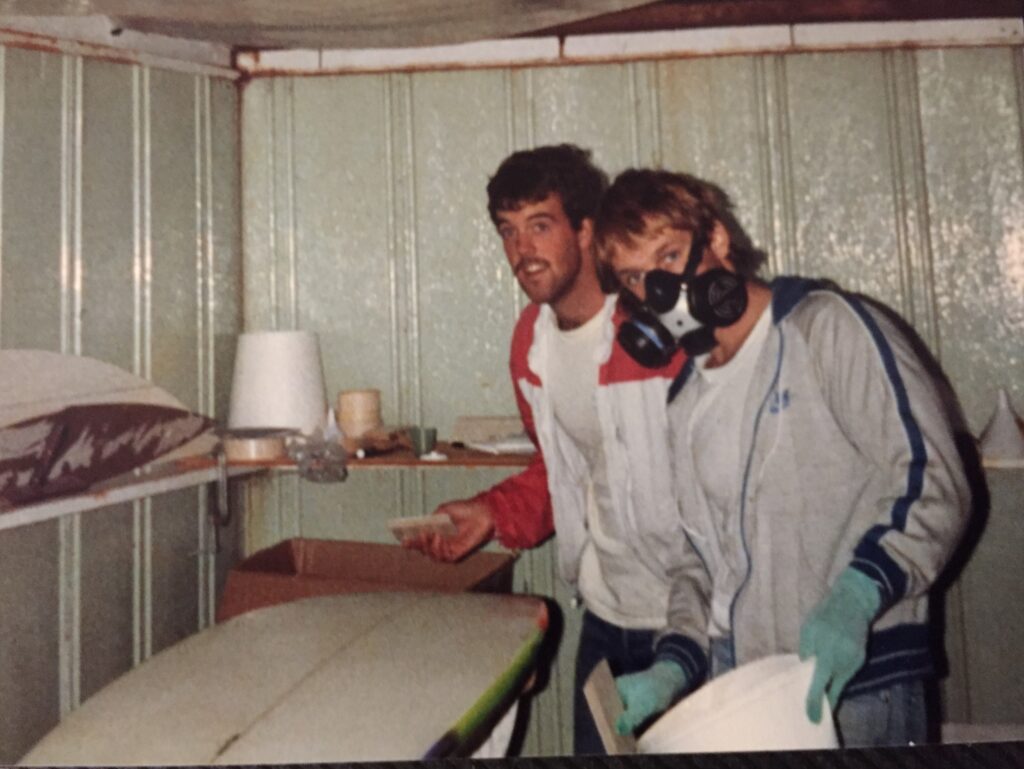 Jack Scovel and Tony Gile glassing one of their custom shapes 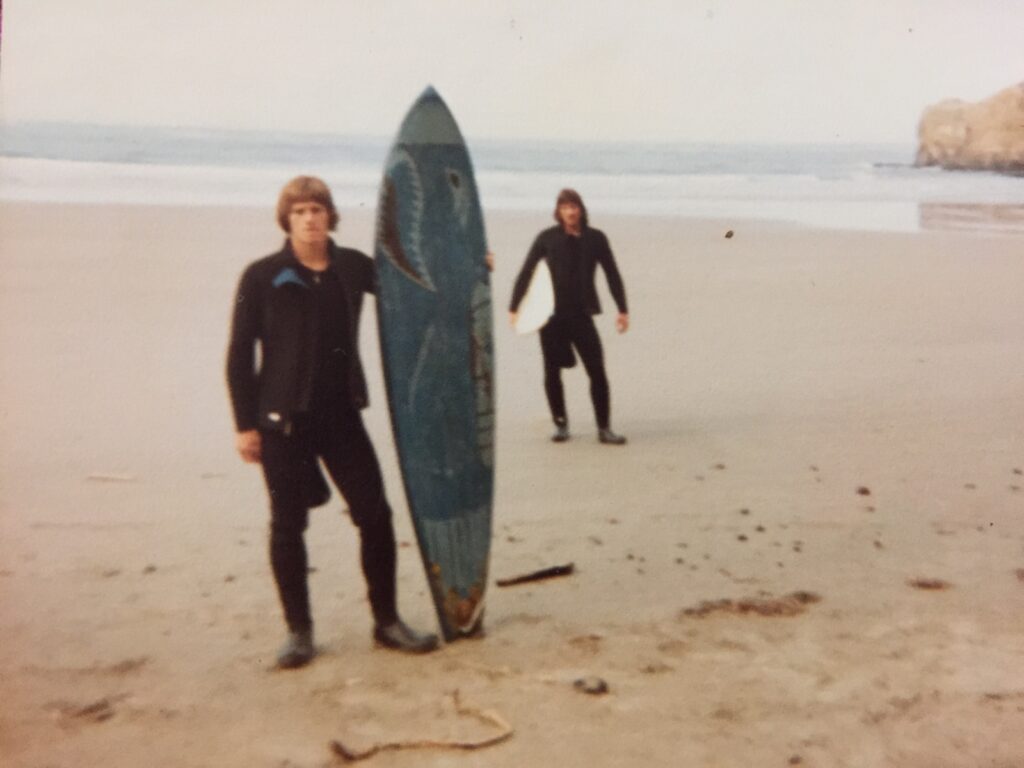 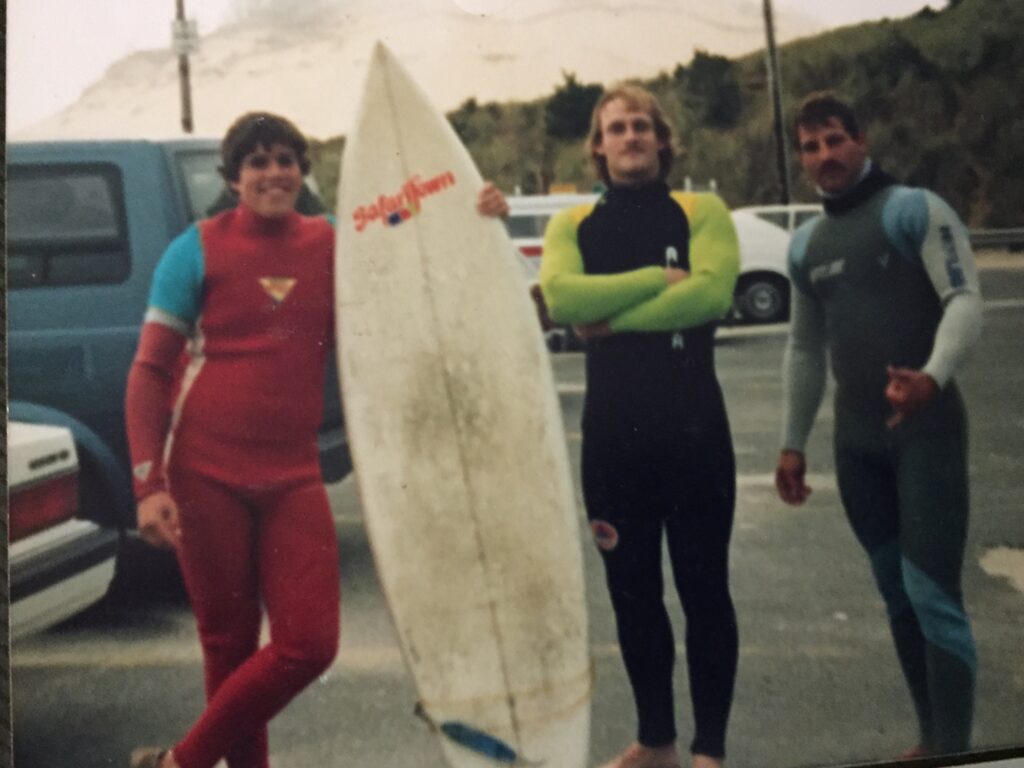 Surfing Pacific City in the late 80’s when they were the crowd. 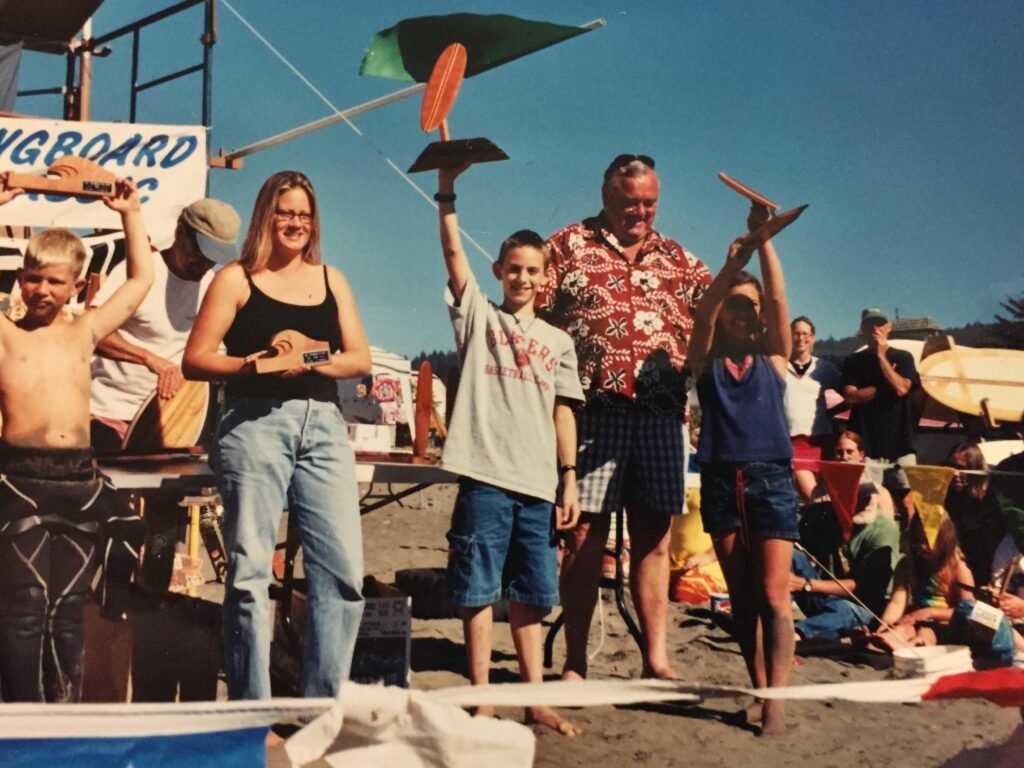 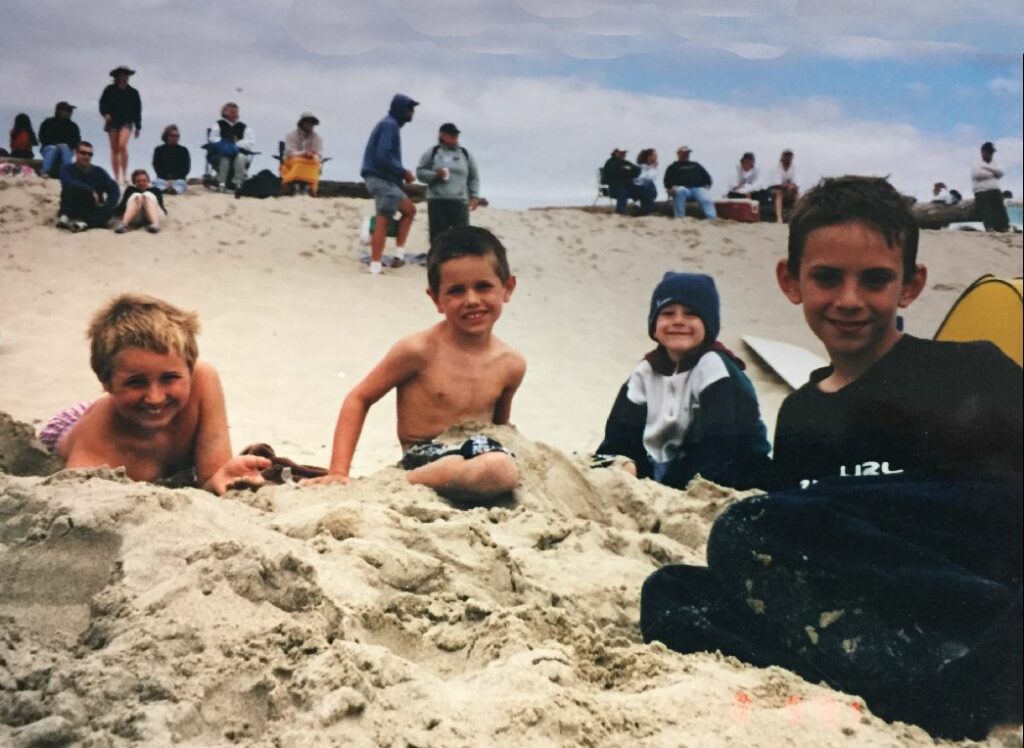 Fun at the beach in between contest heats. 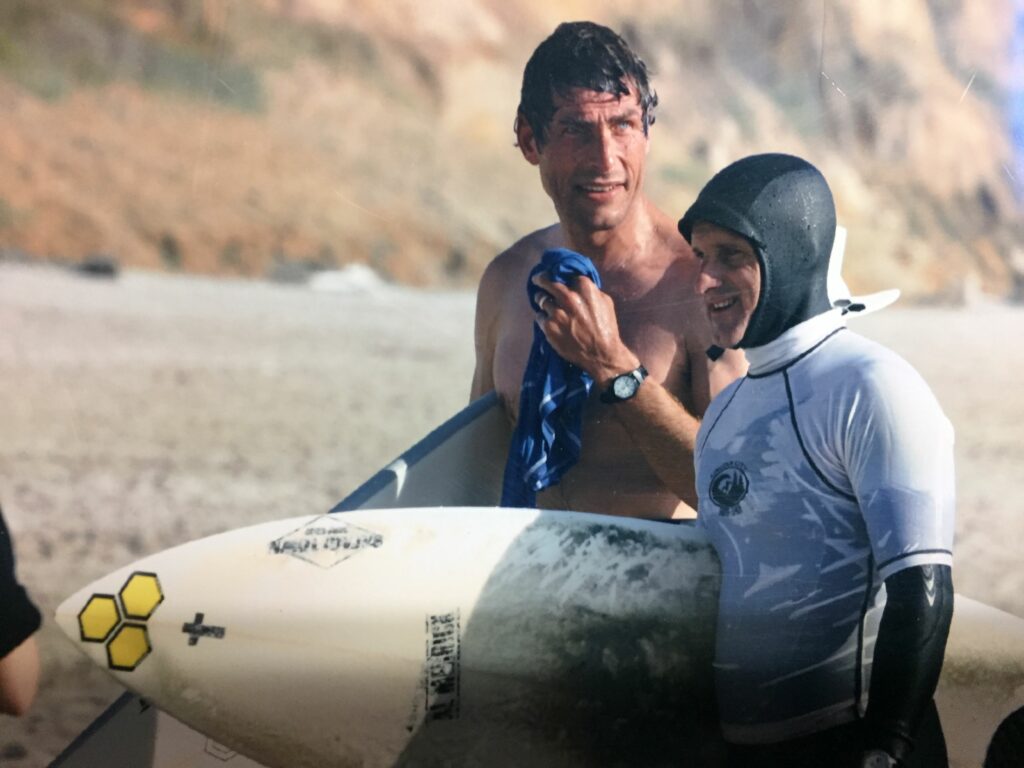 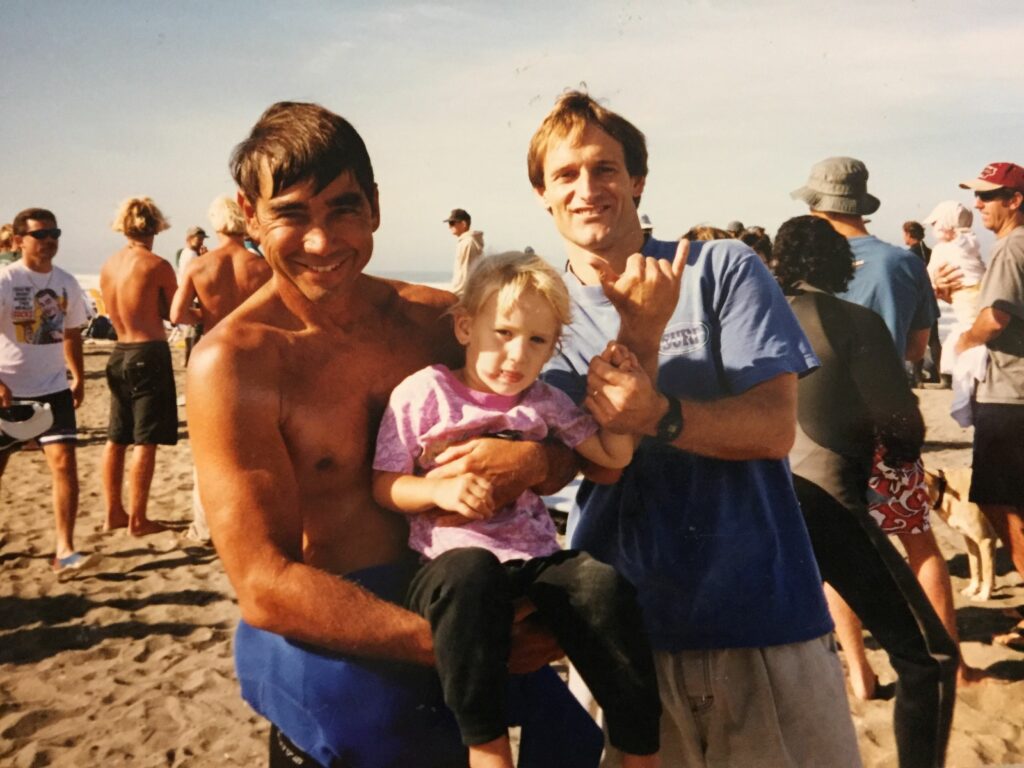 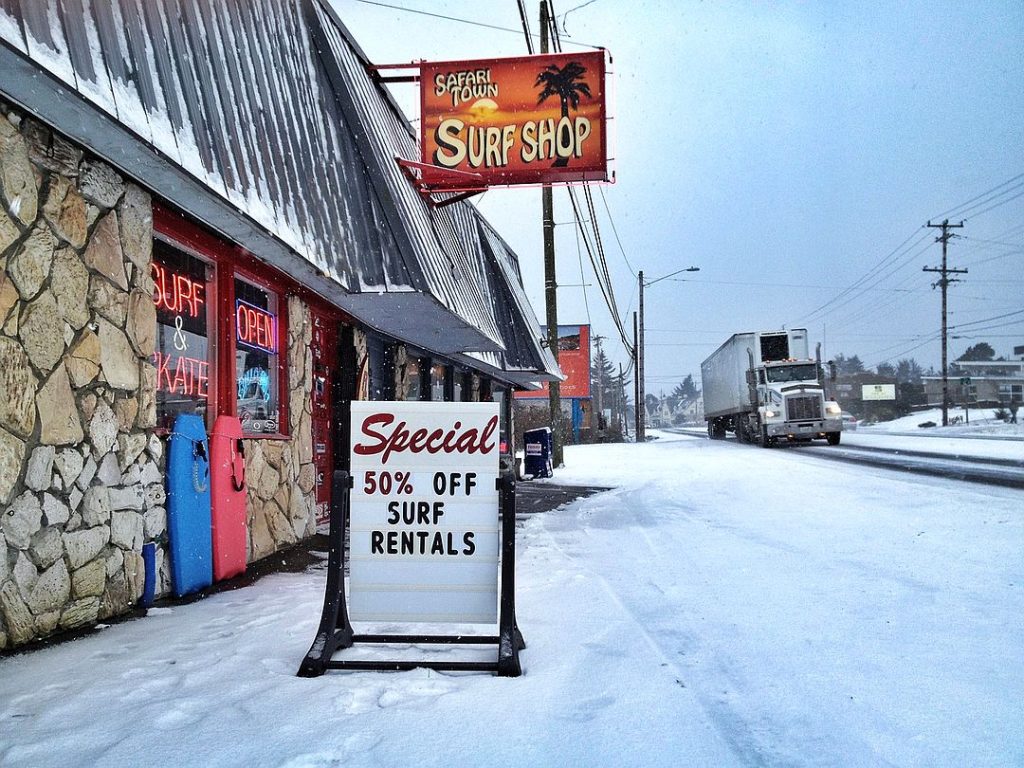 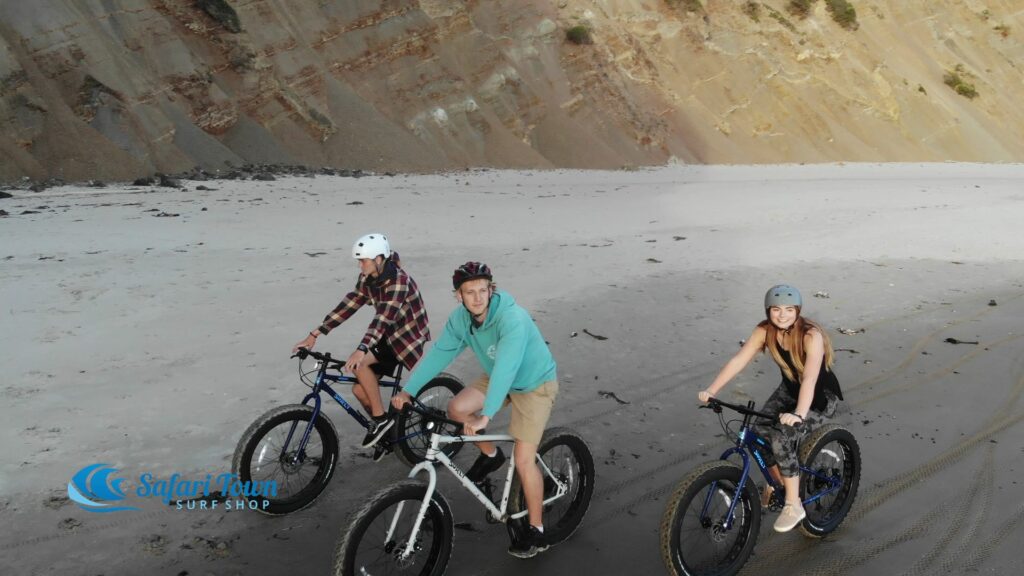 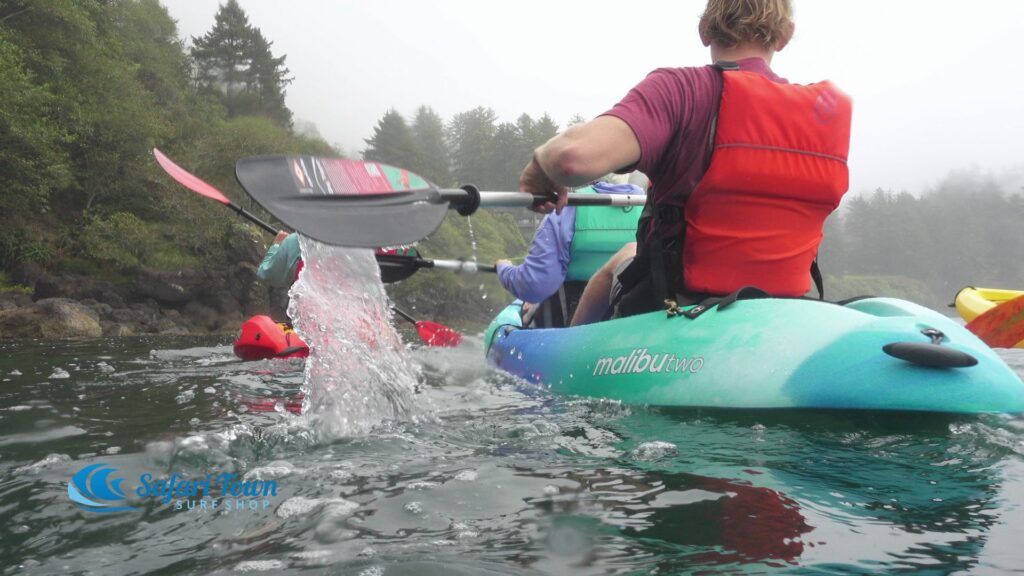 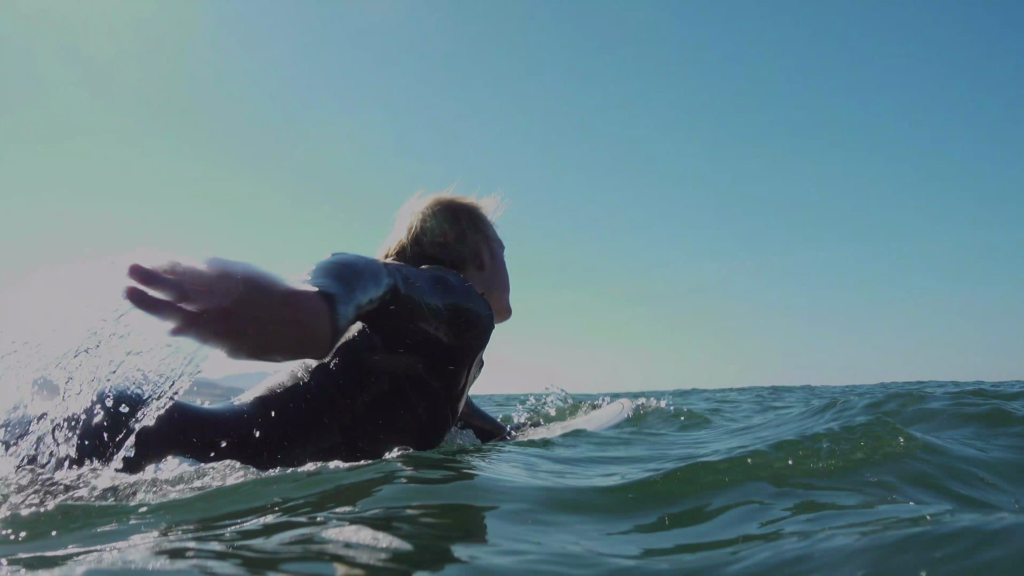